Just read a great article showing the year-over-year increases of the Greater Capital Region’s residential real estate market.  The signs are promising for both buyers and sellers as inventory, average sales price, and number of listings under contract increases.  All signs are pointing to an encouraging 2015!!  Below is the article from Washington Post.

Encouraging signs for D.C. region’s housing market
By Kathy Orton January 12 at 10:00 AM
http://www.washingtonpost.com/blogs/where-we-live/wp/2015/01/12/encouraging-signs-for-d-c-regions-housing-market/
(Andrew Harrer/Bloomberg)
Sales in the D.C. region’s housing market picked up for the first time in a year last month, a sign that home buyers may feel more confident heading into the new year.

For most of 2014, the D.C.-area real estate market was flat. Although there were pockets of robust activity and others of sluggish sales, in general, the market didn’t experience big gains or big losses. Instead, it just meandered along. This wasn’t a bad thing. Slow and steady works best in a recovery.

Still, the modest increase in sales last month was encouraging.

According to RealEstate Business Intelligence, a subsidiary of the Rockville-based multiple listing service MRIS, there were nearly 300 more homes sold last month than in December 2013, an 8 percent year-over-year increase. It was the first year-over-year increase in 2014. Although the total sales figure in 2014 was 6 percent below 2013, it was higher than the annual totals for every year from 2007 to 2012.

Pending sales – sales that are under contract but where the deal has not closed – also increased, jumping nearly 11 percent compared to December 2013. Pending sales are an early indicator of buyer activity. Until November, when year-over-year pending sales were up slightly, that metric had been negative dating back to November 2013.

The increase in sales could be attributed to the rise in inventory. Discouraged by the lack of selection, many would-be home buyers have been sitting on the sidelines. Now as more and more homes are being listed, sales have been rising. 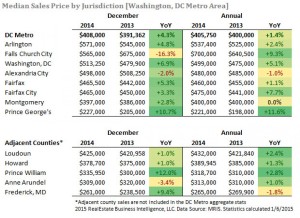