Are affecting g our economy. What are some impacts of U.S. interference in the Middle East?

A Recent sale at the Flour Mill boutique condominium in Georgetown!  This remarkable 2BR/2BA condo is ONE of only THREE units in the building to sell for over ONE MILLION dollars.  If you, or someone you know, might be interested in working with an experienced real estate professional please contact me.  JUST SOLD 1015 33rd St.

Life as an octogenarian.  #HughHeffner

Fully recovered from a 1985 stroke, he appears to have all his marbles and an undiminished energy level. He still manages to have sex, popping Viagra as the occasion warrants. And thanks to the surprisingly successful reality show “The Girls Next Door,” he has a brand-new fan cohort: women, even many middle-aged ones, who no longer regard him as a degrading smut peddler — the publisher of a magazine that Gloria Steinem once said made a female reader feel like a Jew studying a Nazi manual — but as a benign and indulgent paterfamilias, a kind of fairy godfather turning worthy, wholesome-looking young women into platinum-haired, big-bosomed princesses whose every need is provided for.

Hefner — or Hef, as he is known to just about everyone — is famous for bestowing presents of plastic surgery on his many girlfriends and may well have gifted himself. His neck is taut and wattle-free. His skin, owing to infrequent sun exposure and generous bastings with baby oil, has a Madame Tussaud-like smoothness and suppleness. One former girlfriend has said that in the bedroom, with his clothes off, he practically glows in the dark.

Over Christmas, Hefner surprised celebrity watchers by posting on Twitter that he had become engaged to 24-year-old Crystal Harris, the latest and, if he is to be believed, the last in the endless string of young women who have paraded through his bedchamber: most of them blond, many with names ending in a vowel and all of them with mammary tissue that appears to have been injected with helium. Hefner has been married twice before, so the notion of his settling down again may represent the triumph of hope over experience. But a few days before Christmas, he told me: “This is it. This is a very, very special one. I expect to spend the rest of my life with her.”

A couple of weeks later, Hefner was on the business pages, trying to buy back his own company. That he is still around, still making news, is, depending on your point of view, either remarkable or a little embarrassing. He is, on the one hand, a great success story — a man who turned his sexual daydreams into a fortune — and, on the other, a fossil who doesn’t understand that the sexual revolution ended decades ago and that, in any event, it wasn’t for geezers. Some observers on Wall Street used to think that the best thing that could happen to Playboy would be for Hefner to act his age and honorably take up his slot next to Monroe. David Miller, an analyst at the investment firm Caris & Company, once said, “We believe that Mr. Hefner’s death could result in a material stock-price uptick.”

which he took public in 1971, private again. He offered the stockholders $5.50 a Photo 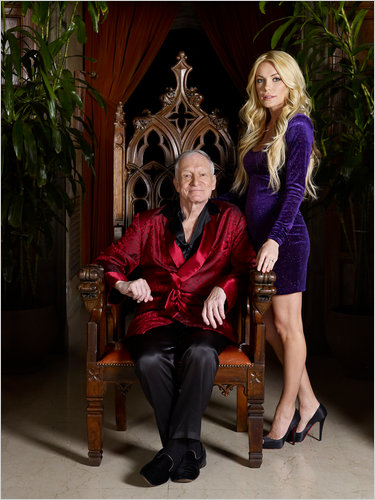 Hefner, 84, and his fiancée, Crystal Harris, 24, at the Playboy Mansion.CreditCatherine Opie for The New York Times

In the realm of men’s magazines, Playboy, which Jellinek champions with the ardor and occasional near-breathlessness of a convert, now represents enduring, old-fashioned values. Jellinek compared it to a vinyl record in a world of MP3 files.

Please bring offers by Monday, 5/12! The home is easily accessed from the private parking located in the back of the home, right off of Garfield St. This home is intelligently designed and is perfect for entertaining, relaxing, and working. Finished LL w. recreation/fitness center, and personal spa. Picnic perfect lawns surround the home and offer monumental views of The National Cathedral.